This year our conference was held in collaboration with Göteborgsoperans Skövdescenin Skövde. We held our conference here because of the premier of opera SHANGHAI, which was a part of our programme.

We had Erik Nordlund and Peter Karppinen from Medis5 who filmed and made interviews during the day.

The day began with lunch and check in, thereafter Johannes Lundberg from  The Conference Guide project, welcomed the audience and introduced the moderator of the day, board member Kjell Stjernholm. During the first day of our conference the following was included:

Presentation of The Conference Guide project
Members Hanna Björklund and Magnus Östling from The Conference Guide project made an introduction about the project. The aim is to work with and establish places for development and conversations about critique, by arranging conferences on culture. The role model is the English  Creative Minds project, by Carousel. The project is funded by the the Swedish Inheritance Fund. Mosaikteatern is the owner of the project in collaboration with Culture and Quality.

After the performance a conversation was held. Camilla and Malin talked about how they worked together. They introduced the concept of “the third world”, something that’s created when Malin’s thoughts meet Camilla’s interpretations. Camilla led us through a workshop in which we could pass around life and leave our sorrows for death.

Annual meeting
The annual meeting of the association was presided over by Kersti Larsson, from Studieförbundet Vuxenskolan. The board members Helena Petersson (chairperson), Kjell Stjernholm and Anneli Aaltonen-Krantz were re-elected for another two years. Olle Norberg and Sayam Chortip were elected as new board members.

The A-konst association
Chairperson Nita Lorimer gave us questions such as, ” Do you have to be able to organize your life to be an artist?”. Emelie Hansson and Vidar Lorimer-Olsson told us about their work and their thoughts on creative work.

They held a workshop and we were given pictures of both well-known artists and unknown artists with the question: “What’s outside art and what’s inside art?”, can we see a difference and why?

Opera with Dala-Floda
Anna Eklund-Tarantion, an operas singer in Sweden, told us about the opera festival in Dala-Floda and how there is a long winding queue outside the grocery store when the festival begins. Johanna Nyberg sang for us with Jennifer Fergusson Kestis on piano.

Anna also demonstrated together with Johanna on how she works with people who want to try singing opera for the first time.

The Opera SHANGHAI
We saw the newly produced opera SHANGHAI a collaboration with Göteborgsoperan and ShareMusic. SHANGHAI is an opera about ordinary people with ordinary lives, sometimes they get scared and fight to break free. It’s an exciting production with a mixed ensemble of professionals and amateurs together exploring the power of the voice. After the opera we had a conversation with some members of the ensemble.

And so the day ended and chairperson Helena Petersson gave Kjell and The Conference Guide project our thanks for leading us through the days. We hope to see you next year!

A special thanks to Studieförbundet Vuxenskolan and the Swedish Inhertiance Fund who made this possible! 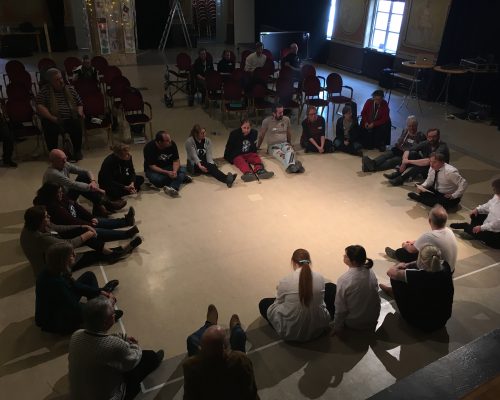 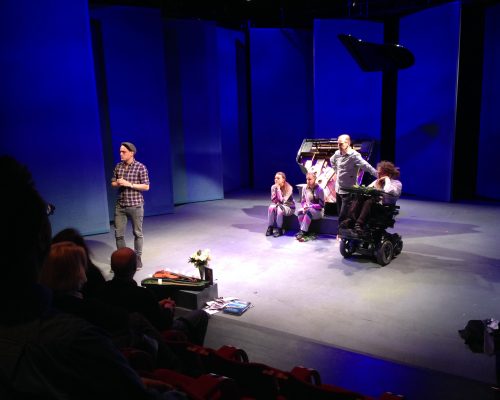